Over the weekend I’ve been trying to think of a strapline (as in slogan, not a belt welt on a burning hot bottom) for my latest work. You know, a short, snappy phrase to go on the front of the book to get you drooling for more?

The book in question is a blend of erotica mixed with a paranormal fantasy adventure. There’s a dominant winged hero (of course there is!) and submissive human heroine. (Yep, goes without saying…lol) Although, she’s a feisty one. Dormat, she is not. 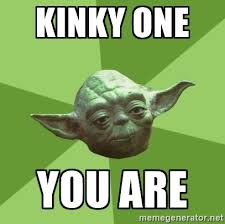 Okay, so enough of my Yoda impressions. Here’s what I’ve come up with so far…

— Two worlds. One chance. No going back!

— Everything she thought about her life was a lie.

— She is the key to their survival. She just doesn’t know it yet.

— The Black Army is coming. Stealth is their weapon of choice.

— Her life is on lock-down. Only he can release her. But he has no intention of doing so.

— The witches are coming. Their minions are strengthening. Only she can save both worlds.

— When two worlds collide, there can be only one winner.

— He is her protector. She is his Child of Destiny.  Together they must bond as one.

— The evils of the box are all around us. You just don’t see them. But we do.

— She is the vessel of Hope. He just hasn’t told her yet.

— Hope is inside her. All she has to do is obey.

— He’s not going to stop until she’s his.

— When two worlds collide, she is their only Hope.

— They were onto him. He was part of an order to protect the Magick Box of Destiny.  He got to her first. Now she is his..

— Imagine a world filled with angels, demons and witches living secretly among us. They’re real. You just don’t see them.

— Hope is her only chance.

— With Hope she has a chance.

— When Hope is your only chance, would you be her vessel? What if you have no choice?

— Monsters live among us. Only a few can tell.

I could go on, but by now I’m sure you get the gist. As I type this out I’m feeling more mojo for the smaller hooks.

What do you think? Which ones sound more exciting? If you’re an author, do you write these straplines for your own books?

P.S. Next I’ll attempt the monster of a logline. Not my favourite thing… if staplines don’t get you howling like a banshee loglines will.